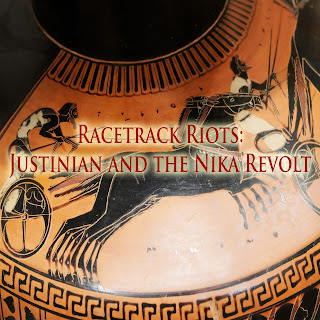 The Romans of the 6th Century were living in a changing world: the Western Empire (including Rome, itself) had fallen. And a new, upstart emperor had his former-prostitute wife were making radical changes in Constantinople.
But the Romans could take solace in the sport their lives had come to revolve around: chariot racing. The Romans cheered either for the Blue or the Green chariots, and the rivalry between the two fan bases was bitter, even violent. But when an execution of popular leaders was ordered and then botched, the two factions forgot their differences.
What started as a normal day at the races blossomed into a revolt that threatened to destroy one of the greatest cities in the world and end the reign of one of Rome's most interesting and ambitious emperors.
Posted by Stu at 3:32 PM